The Oxford (OII) summer school is a huge pool of idea and inspiration. I have recorded few of memorable quotes here:

“You don’t have to understand it.. it doesn’t matter.” (Gerry J Sussman, MIT, while quickly showing his slides)

“As a computer scientist I would trust technical solutions more (than legal ones).” (Harry, responding during a discussion).

“My supervisor said you must be able to explain your research goal in sixty seconds.” (Matthew, during his presentation).

“Just because you have a computer and an Internet connection, it does not make you a serious journalist any more than having access to a kitchen makes you a serious cook.” (Ulla, in her presentation).

“Do you know that a dingo in Australia kills a baby in every 20 minutes?” (Jonathan Zittrain, Harvard, advising students over the important element of their presentation). 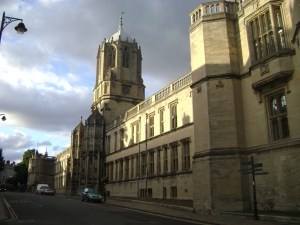 “E-government sites don’t seem to be on the online High Street; people just don’t go there not even by accident.” (Helen, OII, in her lecture).

“The history of human civilization is a history of memory outsourcing.” (Yorrick, OII, in his lecture).

“When i was child, my father told me to save my copyright statement in an envelope and mail it back home from the post office.” (Kevin, in his presentation).

“The biggest failure of regulatory fremwork dealing with the technology is it is framed against specific technology.” (Danny, MIT, during a lunch chat at OII).

“There is already a sea of defintions out there, you don’t have to unncessarily come with the new ones.” (Ellen, OII, commenting on student’s presentation).

“An important question you need to further ask in your research is, so what?” (Vicki, OII, responding to students presentation).

“We’ve heard Scott McNeally said ‘get over it (the privacy)’, so let us now get over McNeally.” (Danny, MIT, in his lecture).

“I don’t want to be rude, but who are you?” (Tobias, posing the question to someone in the seminar room).

“Punting is like life and death, only it’s not too serious.” (Christian, while trying to direct the punt away from the bank).

“I am OK!” (Oshani, while cliff-hanging on the bow of her punt in the chilly Oxford river waters after she lost an argument with the pole and gravity forced her to abandon the ship).

“You don’t look too uninformed when you speak on the phone and in front of Google.” (Les Carr, in his lecture).

“Was it you, Monica?” (Puneet, when the lecture was subsequently disrupted by a loud noisy drill-like sound, accidentally switched on by Marcos’ head).

“A time will come where you people will invent things that I don’t. It’s certainly not finished.” (Tim Berners Lee on the Internet technological inventions).

“I think you should be afraid.” (Tim Berners Lee on the ‘Future of the Internet’ as written by Zittrain).

“Where is the US in that picture?” (Danny, jokingly asked Barbara when the latter showed the map of Portugal during her presentation).

“My research project will make the social scientists, lawyers, and others very busy.” (Marcos, in his presentation).

“The life of the Oxford Internet Institute started from the master bedroom.” (Bill Dutton, while showing some places of the building in the Balliol College which was used by the OII in its commencement).

“Having been reporting almost daily, you guys actually have an influence on us.” (Jim Miller, on students’ discussions and opinions on Microsoft).

“From here, we would be really happy if your dissertation are improved and completed.” (Bill Dutton, on the final session before closing SDP 2008 ).

“I don’t understand, but I care.” (Lei Zhang, in his presentation on web science)

“It’s large!” (Tim Berners Lee, when asked about what the ‘web’ is)

“Would you still be able to carry on with your PhD research even if you haven’t had known about web science?” (Sonny, during group seminar on web science)

“Thank you Your Honor” (Harry to Minister Paul Murphy)

“You have to believe it.” (Henri SL, discussing about the web science)

“I have just saved the future of the web.” (Tobias, after finding Tim Berners Lee who was almost lost at the canal side with some students)

“It’s very high competition, but I’d love to see you as part of the faculty in two thousand twenty.” (Wolf Richter, after being voted as the next OII Director at the final dinner)

“Thank You. So, I don’t need to have a PhD?” (Mingfen, jokingly after being voted the next Bill Gates)

***To my SDP colleagues, if you have a say on these, or have other quotes, please let me know. I would love to have especially the ‘abreast’, the ‘bushing’, and the ‘your honor’ things…